1,200 Indians queue up to shell out half-a-million dollars for US green card

By Shailesh Menon, ET Bureau | Updated: Jun 30, 2016, 02.53 PM IST
MUMBAI: About 1,200 Indians have queued up to shell out half-a-million US dollars each to migrate to the US through a government sponsored 'invest in the US and get a green card scheme', according to immigration consultants. The scramble follows a US government plan to increase the investment such applicants need to make to get an EB-5 visa — from $5,00,000 to $8,00,000 from October 1.

The EB-5 Immigrant Investor Program is a “paid invitation” for non-Americans to invest and live the ‘American dream’. While America still keeps its doors ajar for highskilled migrants (through student and job visas), Uncle Sam is now looking for well-heeled foreigners who can invest in his country. 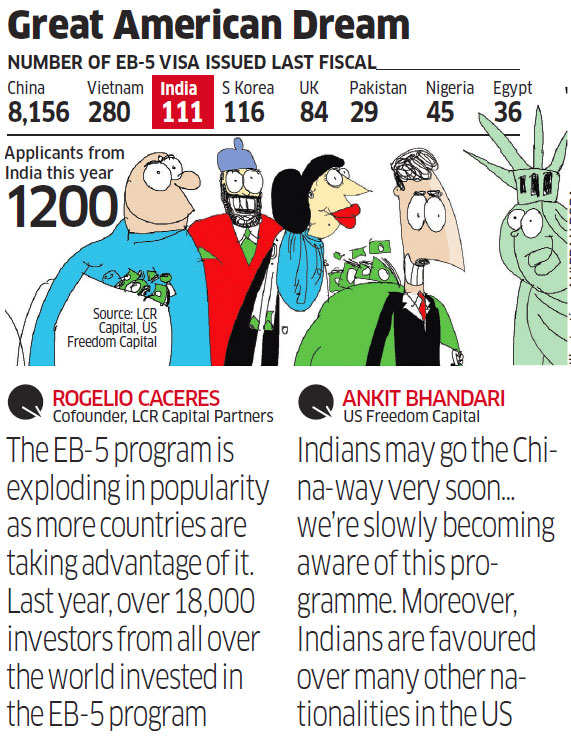 “The EB-5 program is exploding in popularity as more countries outside of China are taking advantage of it. Last year, over 18,000 investors from all over the world invested in the EB-5 program,” says Rogelio Caceres, co-founder of LCR Capital Partners, an investmentcum-immigration consultant.

Applications from India, however, are insignificant compared with Chinese applicants, who managed to secure over 8,150 visa approvals in FY15. “Indians may go the China-way very soon… we’re slowly becoming aware of this programme. Moreover, Indians are favoured over many other nationalities in the US,” says Ankit Bhandari of US Freedom Capital.
ADVERTISEMENT

The EB-5 programme has two broad divisions — the direct investment route and the regional central (investment) programme. The former is quite cumbersome as it involves starting a new business and creating at least 10 full-time local jobs. A person taking this route will have to invest at least $1million (about Rs 6.7 crore) in a business in that country. The US government is thinking of raising this limit to $1.2 million next fiscal.

The regional central investment programme, on the other hand, is simpler and cheaper. All you have to do is invest (as a limited partner) $5,00,000 in a government-approved EB-5 project in America. The investment is re-deemable after five years. You can even pocket a 0.5-1% per annum return if you invest in a profitable venture. The investor gets a green card (for himself and his immediate family).

EB-5 visas are issued in 15-18 months after submitting applications and making the investments. If visa conditions are met, a green card is issued after five years. A green card-holder can apply for US citizenship after five years. “The US government is only concerned about employment opportunities this programme generates.

They’re not really worried if the venture is profitable or not,” says Pankaj Joshi, managing director, NYSA, a consultancy group specialising in the EB-5 programme.
ADVERTISEMENT

“If your investment goes into a venture that fails to generate the required employment, your green card at the end of five years may get rejected,” Joshi warns. The US government has identified zones for these investments.

At the end of five years, the applicants have the option to stay invested in the project, wherein they will start earning a higher RoI, depending on the profitability of the venture. They also have the option to redeem the investments at the end of five years, when they get the green card.
Download
The Economic Times Business News App for the Latest News in Business, Sensex, Stock Market Updates & More.