The health ministry has cracked the whip on states for improper implementation of the NRHM, a flagship programme of the government.

By Sushmi Dey, TNN | Updated: Dec 25, 2015, 11.44 AM IST
NEW DELHI: The health ministry has cracked the whip on states for improper implementation of the National Rural Health Mission ( NRHM), a flagship programme of the government for making health services available in rural areas. 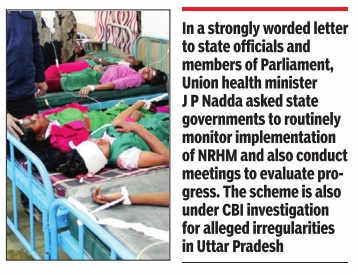 In a strongly worded letter to state officials and members of Parliament, Union health minister J P Nadda said the Centre may not be able to release more funds if states fail to utilize the money properly.

The ministry has also asked state officials to routinely monitor implementation of the scheme and also conduct meetings to evaluate progress.

The latest letter by Nadda also highlights that the ministry is privy to the fact that regular meetings of the monitoring committee are not taking place at the district level while it is crucial to evaluate the progress in implementation of the programme.

NRHM is under CBI investigation for alleged irregularities in Uttar Pradesh. The investigative bureau has registered 104 cases from 2012 till November 30. However, so far no one has been found guilty. According to news reports, CBI had also examined BSP supremo Mayawati with relation to the multi-crore scam. It is also expected to examine more former ministers of the state.
On Tuesday, Nadda informed Rajya Sabha that investigation in each case is dependent upon the nature of crime involved, quantum of work required to be done, availability of suspects etc. "As such, no time frame can be stated for completion of investigation," the minister said.