National Security Cutters, the flagships of the Coast Guard's cutter fleet, are designed to replace the 378-foot Hamilton-class high-endurance cutters.

James will be commissioned on August 8 in Boston. The ship will then be stationed in Charleston, South Carolina, alongside Ingalls' fourth NSC, Hamilton (WMSL 753). Ingalls has delivered five NSCs and has two more under construction. Earlier this year, Ingalls was awarded a construction contract for an eighth NSC.

National Security Cutters, the flagships of the Coast Guard's cutter fleet, are designed to replace the 378-foot Hamilton-class high-endurance cutters, which entered service during the 1960s. NSCs are 418 feet long with a 54-foot beam and displace 4,500 tons with a full load. They have a top speed of 28 knots, a range of 12,000 miles, an endurance of 60 days and a crew of 120. 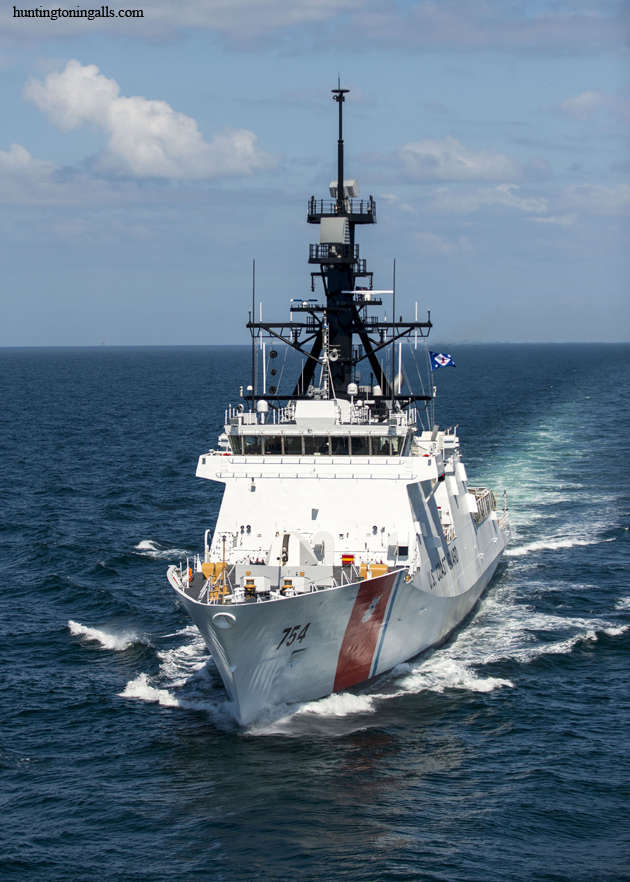 ADVERTISEMENT
"The Legend-class NSC is capable of meeting all maritime security mission needs required of the high-endurance cutter. The cutter includes an aft launch and recovery area for two rigid hull inflatable boats and a flight deck to accommodate a range of manned and unmanned rotary-wing aircraft," the HII release says.

"It is the largest and most technologically advanced class of cutter in the Coast Guard, with robust capabilities for maritime homeland security, law enforcement, marine safety, environmental protection and national defence missions. The Legend-class of cutters plays an important role in enhancing the Coast Guard's operational readiness, capacity and effectiveness at a time when the demand for their services has never been greater," the release claims.

"James is an excellent ship and another example of the outstanding work accomplished by our shipbuilders," said NSC Program Manager Derek Murphy. "Through serial production in this program, each successive ship continues to come down the learning curve. The quality remains world-class, as proven by the substantial reduction in the number of trial cards with each successive ship in the class."
Download
The Economic Times Business News App for the Latest News in Business, Sensex, Stock Market Updates & More.
Download
The Economic Times News App for Quarterly Results, Latest News in ITR, Business, Share Market, Live Sensex News & More.