Chandra said he wants to reinforce a leadership mindset at the group, leverage its enormous collective strength and deliver superior returns to shareholders.

By ET Bureau | Updated: Feb 22, 2017, 01.05 AM IST
MUMBAI: N Chandrasekaran took over as chairman of Tata Sons on Tuesday, pledging to work closely with group business leaders and maximise shareholder returns at the 150-year-old conglomerate that was rocked by a battle for control after predecessor Cyrus Mistry was ousted in October last year.

Chandrasekaran, popularly known as Chandra, started the day by casting his vote in the Mumbai municipal polls before heading to TCS to pass on the CEO baton to Rajesh Gopinathan. After that, he went to Bombay House — the headquarters of the $103-billion Tata Group — where he was greeted by chairman emeritus Ratan Tata. Both of them garlanded the busts of Tata Group founder Jamsetji Nusserwanji Tata and former chairman JRD Tata.

“I am very proud of being part of the Tata family and I look forward to working with all the group entities, bringing the group together to make an impact both in terms of business and also in terms of the society, at large,” said Chandrasekaran, the first non-Parsi and third non-Tata chairman of the group.

“We will work together with all the business leaders in the group to drive a lot of discipline on capital allocation and shareholder returns,” he said later in a media release. 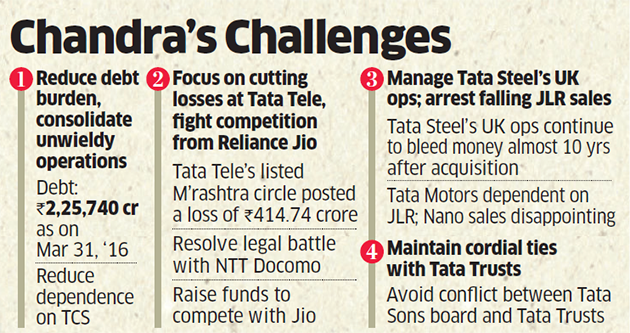 “I look forward to the opportunities of the group in this new role for the years to come and seek support from everyone so that we can collectively make it happen,” Chandrasekaran said.
ADVERTISEMENT

The new chairman of the holding company said he wants to reinforce a leadership mindset at the group, leverage its enormous collective strength and deliver superior returns to shareholders.

“This can only be achieved with a relentless focus on the customer, by gaining a deeper understanding of their aspirations, and by designing our products and services to meet their needs,” he wrote in a letter to employees. “In today’s context, where technology is playing a key role in business success, the need for innovation is vital to help reimagine and reinvent our businesses for the future.” Chandrasekaran attended a meeting of the Tata Sons remuneration and nomination committee and chaired his first board meeting at Bombay House after that. Among those he met were two group veterans, Tata Trusts nominee Krishna Kumar and his former boss at TCS S Ramadorai, apart from several senior executives to take stock of the various businesses.

The board of Tata Sons, including its new boss, thanked Ratan Tata for stepping in as interim chairman after Mistry’s ouster.

Mistry took the fight to shareholders before stepping down from the board of listed Tata companies in December. Both sides accused each other of poor business decisions and weak corporate governance norms.
ADVERTISEMENT

Mistry is currently waging a legal battle with the group for allegedly oppressing his minority shareholder rights. Mistry’s family holds an 18.4% stake in Tata Sons. Tata Trusts, a group of charitable organisations controlled by Ratan Tata, hold a 66% stake. Tata Group companies and Tata family members own the rest.

“I am sure he will bring considerable value to his leadership role in the Tata Group in the years ahead,” he said. Chandrasekaran’s ascent to the top job was inspiring, a board member said.

“Today is an important day in many ways, for every ordinary Indian and professional who is willing to work hard, and stand by values,” said Amit Chandra, a Tata Sons board member.

“Chandra signifies great hope that you can aspire to rise to head a group as prestigious as the Tatas… Chandra is a relationship and consensus builder and is expected to carry all stakeholders along.”
Download
The Economic Times Business News App for the Latest News in Business, Sensex, Stock Market Updates & More.
Download
The Economic Times News App for Quarterly Results, Latest News in ITR, Business, Share Market, Live Sensex News & More.

Reliance Jio will charge customers from April 1, but it won't burn a hole in your pocket