IPO jockeys made good money in past year; is there some ride left?

Except a few laggards, all new market entrants were star performers.

By Jwalit Vyas, ET Bureau | Updated: Jun 12, 2017, 09.59 AM IST
With rising investor optimism, the action is back in India’s primary equity market. An analysis of 21 initial public offerings (IPOs) that hit the market in the past 12 months reveals that 11 of them have gained more than 70 per cent.

Also, one out of every three IPOs gained more than 100 per cent, and only three of them failed to earn return. The benchmark Nifty50 gained 18 per cent and Nifty Midcap gave 35 per cent return during the period.

The ET Intelligence Group looks at the top performing companies listed in the past 12 months to find out whether they still have some steam left for fresh investments. 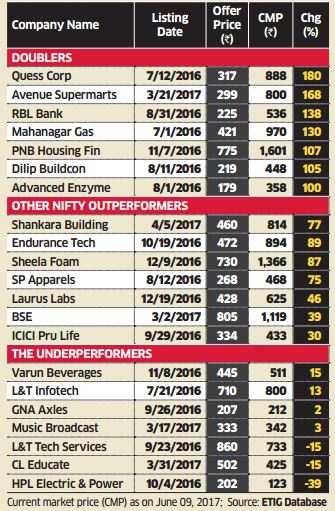 QUESS CORP
Quess Corp’s IPO was oversubscribed 144 times despite its steep valuation multiple of 41 at the time of listing. The company, a subsidiary of Thomas Cook, now trades at 98 times FY17 earnings. In the past five years, its revenue has grown by 6.5 times and earnings by nearly nine times. Its gamut of offerings including recruitment, skill development, payroll, and integrated facility management is growing fast, but the stock appears to be expensively valued at the current price.

ADVERTISEMENT
AVENUE SUPERMARTS
The owner of DMart retail chain is among the most cost-efficient retailer. It has managed to do well even during weak economic times. At the IPO price of Rs 299, the stock was valued at 39 times its FY17 earnings. A steady business model with large opportunity provided confi dence on earnings for the next several years, allowing the stock to trade at 104 times FY17 earnings. The upside from here will be capped for the medium term and the stock may consolidate for the next few months.

RBL BANK
RBL Bank is one of the best performing secondary market debuts of the last year. With forward price-book multiple of four, it is also one of the most expensive banking stocks on a par with Kotak Mahindra and HDFC Bank. The Kolhapurbased lender has a consistent track record of loan-book expansion and earnings growth. Continued progress of its branch-light model will help to sustain high valuations.

MAHANAGAR GAS
The natural gas distributor to Mumbai and adjoining areas commanded a price-earnings (P/E) multiple of 11 at the time of IPO. It now trades at a trailing P/E of 24 after the company delivered higher-than-expected gas volume growth and better profitability. The volume growth from here may be limited but higher earnings visibility can help the company’s valuation increase further.
ADVERTISEMENT

PNB HOUSING FINANCE
The fifth largest housing finance company recorded 62 per cent an annualised loan book growth between FY12 and FY16. In FY17, the loan book grew by 42 per cent. Healthy asset quality (GNPA ratio of 0.25 per cent), robust contribution of individual housing loan (70 per cent of assets) to total business and lower average ticket size (Rs 31 lakh) also makes it an appealing investment opportunity given the government’s thrust in the housing finance space. Its stock trades at 4.3 times forward book value, which lower than its peers’ valuation of above five times the book.

ADVERTISEMENT
DILIP BUILDCON
The Madhya Pradesh-based construction company has a strong execution record in roads, mining and irrigation sectors. Its order book of Rs 17,600 crore gives revenue visibility for the next three years. Its stock trades at seven times its expected FY19 operating profi t before depreciation (EBIDTA), which is on a higher side. The investor interest is expected to stay intact given the government’s focus on infrastructure development and the company’s execution record.

ADVANCED ENZYME TECHNOLOGIES
The integrated enzyme company sells over 400 products made from more than 60 enzymes that it has developed with R&D spending of 3-4 per cent of revenue. It intends to enter the fast-growing animal nutrition business. Analysts expect 20-25 per cent earnings growth for the next 10 years. It delivered 21 per cent earnings growth in FY17.
Not making enough money in stocks? Click here for real-life stories of successful investors.
Too busy to trade in stocks? Invest in Mutual Funds with ET Money!
Bookmark or read stories offline -
Download ET Markets APP