By PTI | Updated: Feb 27, 2017, 09.44 AM IST
LOS ANGELES: Host Jimmy Kimmel mocked President Donald Trump's "overrated" remark against Meryl Streep by making everyone stand up and give the veteran actress an "undeserving round of applause" at the 89th Academy Awards.

Trump had famously called Streep, nominated for her 20th Oscar this year for "Florence Foster Jenkins", "uninspiring" and "overrated" after she had criticised him at the Golden Globes.

Kimmel, without ever naming Trump, said, "One actress has stood the test of time for her many uninspiring and overrated performances. (She's) phoned it in for more than 50 films. This is Meryl's 20th Oscar nomination ... she wasn't even in a movie this year, we just wrote her name in out of habit."

"Some of you will (win tonight) and give a speech that the president of the United States will tweet about in all caps," he added. 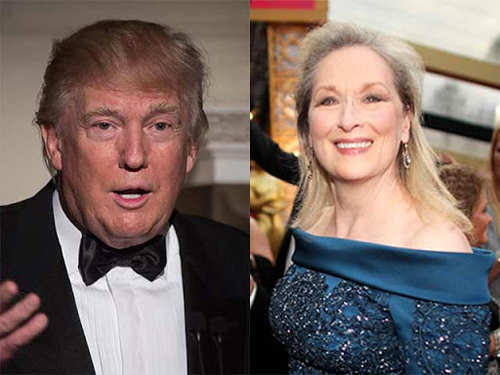 In the beginning, however, Kimmel seemed reluctant to address the elephant in the room, saying he was told to do so by many but felt he can't do it.
ADVERTISEMENT

"There's only one 'Braveheart' in the room. And he's not going to unite us either," he said of Oscar-winner Mel Gibson, who is nominated for best director again this year for his new film "Hacksaw Ridge."

Kimmel said if everyone watching right now "took a moment to reach out to one person you disagree with and have a positive, considerate conversation ... we could really make America great again."

He then went after Matt Damon, his mock-feud partner. Kimmel said Damon made a sacrifice by passing on the role to "Manchester by the Sea" to star in a "Chinese ponytail movie instead and that movie went on to lose USD 80 million. Smooth move dumba---."

Kimmel's first crack on Trump was thanking him because, "remember when last year the Oscars were considered racist?"
ADVERTISEMENT

After picking on Oscar nominee Denzel Washington for directing himself in the film "Fences," he teased French actress and nominee Isabelle Huppert.