The MC is refreshingly adherent to feel and sensation rather than acing a game of Top Trumps.

This writer once asked Horacio Pagani how is it that the Emilia-Romagna region in northern Italy has such a thick concentration of performance machines — Maserati and Pagani in Modena, Ferrari in Maranello, Lamborghini and Ducati in Bologna.

He said it’s all got to do with the Maserati brothers who started in 1914. Perhaps, every other boy looked at one and thought, ‘I will grow up and make my own.’ That’s a remarkable statement in two ways. One, Maserati may have inadvertently fuelled the desire in certain boys called Enzo Ferrari or Ferrucio Lamborghini.

Two, the year 1914. That’s a century ago when the motorcar was a crude implement and Adolf Hitler was just another human. And around the ancient streets of Maserati’s home, Modena, inside the Piazza Grande that houses the Cathedral built in the 10th Century — a UNESCO world heritage site — you could see why a Maserati might inspire someone. The Maserati MC Stradale — that’s Maserati Corsa (race) car for the Stradale (street). 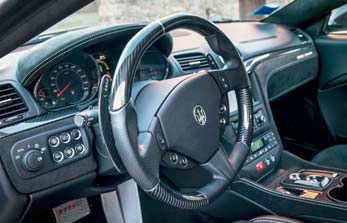 ADVERTISEMENT
Compared to the standard GranTurismo, the MC is 80kgs lighter, has a rear-mounted gearbox that ensures a more racecar-like rear-biased weight distribution, and unlike the GranTurismo, doesn’t do stopgo traffic very well.

Give it an opportunity to get into third, though and the pandemonium inside the cabin matches that of a circus that’s just learnt that its star tiger isn’t in its cage. That naturally-aspirated, non-turbo, non-hybrid V8 in the front doesn’t sound like an engine.

The roars, bellows, growls and the rumble sound like a laboratory where big cats are experimented on. Unlike German sportscars that need you to be doing the high 100s to enjoy the performance, the MC starts sprinkling its stardust even at 40kph. The steering has heft, the pedals have feel and it’s a joy to listen to the gearbox aiding the engine to change tenor as if it has to perform at a concert.

In an era where performance cars are judged solely on lap-times and drag-race videos on YouTube, the MC Stradale is refreshingly adherent to feel and sensation rather than acing a game of Top Trumps.
ADVERTISEMENT
This Maserati with its four proper seats, racecar dynamics and grand touring comfort is the sweet spot between a precise, perfect, but impractical and dull Porsche 911 and a luxurious, but ponderous Bentley Continental, with looks that make visitors to a ten-century-old world heritage site stop, stare, and marvel. And a demeanour to inspire an entire generation to make machines that move your heart and soul. Buy one before they declare it a crime.

Most women like men with good taste in shoes: Sidharth Malhotra