In Tuscany itself, the wine that is being talked about is from Maremma, an "underdog" region, bordering the Mediterranean coast.

By Anoothi Vishal, ET Bureau | Updated: Nov 01, 2015, 01.59 PM IST
Firenze and I have a sort of a weepy connection. The last time I was here, I sat on a bench outside the Duomo, shedding inexplicable tears at the perfection of it all. This time, the waterworks are Negronifueled, but just as contemplative — the inexplicableness of life and all that jazz.

If the Renaissance celebrates the human spirit, there are quite a few spirits to celebrate being in its midst in Italy. You can make a ritual of Spritz, if you are in Verona or Venice or Perugia or even in Firenze. You can indulge in the deadly Negroni (equal parts gin, vermouth and campari, served up with a twist of orange) listening to an open-air, non-ticketed but magical concert. Or you could drink wine.

With its 7 DOCG wines and 44 DOCs, Tuscany, of course, is at the heart of Italian wine-making. (A DOCG label would mean the producer has followed the strictest regulations; DOC rules are slightly more generous). This is also the region, where, 40 years ago, a Renaissance of another kind happened and that much-reviled term today, the "Super Tuscan", came about. 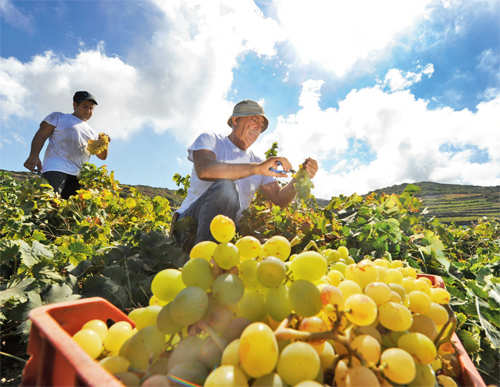 "Super-Tuscan" wines may make you wince today. But in the 1970s, Marchese Piero Antinori's Tignanello which broke away from old-fashioned Italian laws of wine-making by introducing French grape varieties into the blend, upped the image of Italian wine indelibly. Instead of the stereotype of "cheap" Chiantis, Soaves and well, Valpolicellas, that Italian wine had been associated with, what became fashionable were some of the biggest labels as we all recognise today: the Bordeaux-inspired Sassicaia, Frescobaldi, Barone Ricasoli, Tenuta dell'Ornellaia and so on.

These expensive "big" wines from Tuscany may dominate your imagination visà-vis Italian wines. But, now, another break from tradition is underway. There are scores of new wines from different regions in Italy that wine drinkers the world over are experimenting with.

In Tuscany itself, the wine that is being talked about is from Maremma, an "underdog" region, bordering the Mediterranean coast, which has come into its own both with regard to tourism and wine.
ADVERTISEMENT

Scansano, the town at the heart of this region, is just about two hours away from Florence but has a wine-making tradition of its own. Instead of the Sangiovese, the grape that goes into your Chianti, the local varietal here is the Morellino, a clone of the Sangiovese. The reds produced from it are softer and easy to drink. They are also better priced than all those other Tuscan wines we know: Chianti Classico, Vino Nobile di Montepulciano and Brunello di Montalcino.

Of late, some of the biggest Tuscan winemakers have been focusing on this region, including the La Brancaia and Frescobaldi families plus also restaurateurs from as far away as New York, who own estates in the region. The next time, you find Morellino di Scansano in a restaurant list, try it!

For the longest time ever, one of my favourite Italian wines has been the Amarone. The powerful red, with a high alcohol percentage, is often perceived as a wine that Indians think they like (because of its entirely justified reputation) but find difficult to drink. It is a wine to go with meats — a real juicy steak and the like. Depending on the style you are drinking, the Amarone could be full of fruit, pronounced minerality or simply well-balanced so that you don't know that you are drinking such high alcohol content (15-16%).
ADVERTISEMENT

In Verona, the Romeo and Juliet city, at an event dedicated to producers from Valpolicella, I taste such diversity that it leaves me almost breathless. What lingers, however, is the note of "veg marmite" that many of the wines exhibit. Never before have I appreciated this more. But the best of the wines have it so tangibly pronounced that you may as well have been eating some of the stuff. Which is quite timely too, given that chefs internationally have been pronouncing marmite as the "new wasabi" thanks to its growing fan following as a bursting-with-umami food. 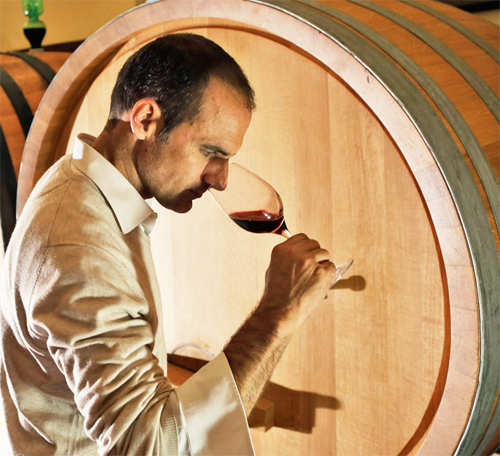 Amarone, made primarily with the local grape corvina, gets its intensity from a unique process of making the red. The best grapes are dried before fermentation for about three-four months. The complexity of the wine results from this shrivelling of the grapes, where flavours and sugars get concentrated. The wines are then matured in oak for at least two years (for the regular wine) and four for the reserve.
ADVERTISEMENT

But on that summer afternoon in Verona when I am systematically going through the entire ranges of almost two scores of local producers, it is not the Amarone that grabs my attention. Rather, it is the Ripasso, unavailable not just in India but lesser-known the world over too, that makes an impact. Even internationally, the Ripasso is somewhat of an unknown entity — unlike its cousins the "big" Amarone and the "light" Valpolicella Classico.

Yet, it may just be that perfect Italian wine you have been looking for all your life. Neither as powerful, nor expensive as the celebrated Amarone, it, nevertheless is full of flavours and sufficient complexity to appease even more evolved palates.

The "Ripasso" is exactly what it sounds like — Valpolicella wine that has been "repassed" over the skin and lees left over from fermented Amarone. This process adds colour, flavour and body to the lighter original wine — as well as alcohol percentage. You can have the wine with aged cheese, red meats and perhaps some of our own lighter curries. People like me who prefer to drink the big, spicy reds sans food can equally sip these on winter evenings, with a book, friend or music. The wine got DOC respectability too, about five years ago.

Wines from lesser-known wine regions of Italy are now becoming increasingly chic, especially in the US, one of the prime export markets for producers in that country. In particular, it is wine from the southern regions of Puglia, Sicily and Campania that are routinely described as the new "it" discoveries these days.

The aglianico, one of the grapes grown primarily in Campania, is now touted as the next big Italian red, for instance — its reputation at par with the two best-known varietals, the Sangiovese and Nebbiolo.

And the wines from Sicily, of course, have captured both imaginations and market shares. These wines coming out of the volcanic island are sophisticated, and usually associated with crispness and minerality.

Both the reds and whites are now in demand and the grape varietal Carricante highly valued. The cultivation is still small, but the reputation of the whites (marked by their citrusy notes and acidity) has made this quite the darling of critics internationally.

What I also discover are the easy-to-drink wines of Sardinia. Arguably one of the least touristy regions of Italy, Sardinian wines are equally a relatively unknown entity.

The industry seems to have only taken off in the 1970s, when some European Union subsidies and driven producers began to change the local wine-making industry, driving it towards better quality (and an international focus).

The region has one DOCG wine, Vermentino di Gallura, and 19 DOC zones. The best known red grape is the Cannonau (from the Granacha grape that originally came from Spain), while its most famous white is the Vermentino (also, Spanish in origin). The whites are usually dry and much better known but you may also find a few gems amongst the reds, including the wines made from the carignan grape, which introduces a note of spice, apt for the Indian palate in the wines.

In Milan, I have been tasting a fantastic variety of some of these wines at a rather apt venue, the Museo Vigna di Leonardo — Leonardo da Vinci's vineyards at an event funded by the Italian government.

Just across the street from the Church of Santa Maria delle Grazie where the Last Supper resides, the vigna is a recent addition to Milan's da Vinci circuit. It has been opened to the public only this year, alongside the global food expo, and is to remain accessible to tours only till this month.

Apparently, in 1495, when Leonardo da Vinci was painting The Last Supper, he was gifted a plot of land, a 66-by-186-yard rectangular one, with vines planted in it. The artist tended to his vineyard himself, even though he would not be around the city to enjoy the fruit of his labour, quite literally. The vineyard was destroyed through the span of history, and the house changed owners. Now, DNA testing has revealed the grape variety planted then to have been the flavorful white grape, Malvasia di Candia. These grapes have been now replanted and the house and vineyard opened to the public. It is here on an almostsummer-day that we taste an incredible variety of Italian wines. And a bit of history.

If Veneto and Tuscany are the big Italian regions for wine (and gastronomy), the other big powerhouse has to be Piemonte. This is the countryside for the Nebbiolo, the grape that goes into a smooth, balanced, often described as "velvet-like" Barolo. The Barbera and the Dolcetto (sweet) are fruity and delicate and both their reputations as serious wines are on the rise. 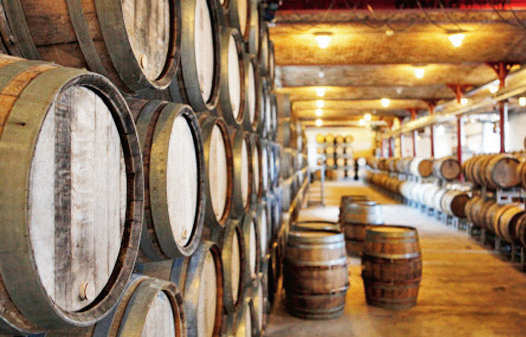 The Barbera in particular, regarded as a grape for lightweight, fit-only-to-be-drunkwine is being experimented on. Producers are now using French oak barrels for maturing the wine to considerable success. Equally, there are other experiments afoot to make blends with French varietals to up the quality.

On the other hand, other grape varietals are finally making that leap to international fame and acclaim as well. There are some delicate, dry but fruity whites in particular: Gavi, the acclaimed label, of course, uses the Arneis. I try some expressions of the Erbaluce. And then there is the Muscat, a grape that has become internationally chic. The Moscato d' Asti style of wines are sweet, with low alcohol and frizzy. And given the fact that Italian sparkling (other than prosecco; the Lambrusco, made from red wine grapes, from Emilia Romagna is an example of sparkling but dry wine that has caught on) are now trending, it may not be a bad idea to have them in India too.

Francesco, our gracious host from the respected Vietti family winery, asks me what I want to drink. And having had a week of Italian wine, I blurt out "Champagne"! It is not as much a sin as I expect it to be. France is just on the other side of the mountains. Champagne sells well in this part of the country and Italian winemakers, sometimes, drink it with visitors from the other side of the globe.
Download
The Economic Times Business News App for the Latest News in Business, Sensex, Stock Market Updates & More.
READ MORE
ADVERTISEMENT