NCERT textbooks may get dearer by 30% from next year

The online orders will enable NCERT to validate the actual requirement of books for the forthcoming academic session and ensure supply without delay.

By Manash Pratim Gohain, TNN | Updated: Jul 28, 2017, 11.12 AM IST
NEW DELHI: The price of NCERT textbooks could rise from the next academic session with the National Council of Educational Research and Training planning a hike of up to 30%. The price of school textbooks was last raised in 2012. However, the council is yet to forward its new pricing plan to the Union ministry of human resource development for approval.

The raising of prices is likely to coincide with the revision of textbooks, currently under way , and with the creation of a new portal that NCERT will launch for schools to raise their demands for the books. Despite the hefty increase in prices, the school books will still more affordable than similar books published by private companies.

Sources in NCERT said that while the council was working on the plan to up the book prices from the 2018-19 academic session, a senior official in the human resource development ministry said the matter was yet to be finalised. The increase, the official added, was justified due to the rising costs of printing, paper and other material. 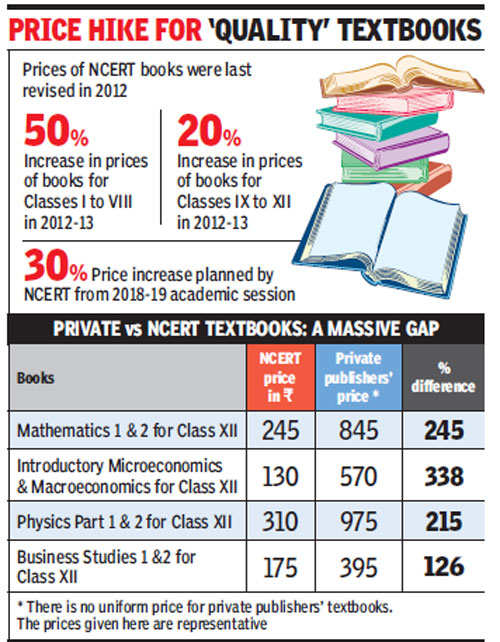 An NCERT source also explained that the price hike was due to the directive of the HRD ministry to provide students with quality textbooks.“With the government promoting reasonably priced school books so that students are not compelled to opt for expensive private publisher's textbooks, it is also ne cessary to qualitatively improve the NCERT books,“ said the HRD official.

A source in the council argued that even if the increase in price of the textbooks was 100%, NCERT's books would be less expensive than those provided by private publis hers. The source also disclosed that the maximum increase would likely be for books used by students in Classes I-VIII.
ADVERTISEMENT

It was last in 2012 that NCERT revised the pricing of the textbooks, with the cost of some of them going up by up to 50%. At the time, NCERT was revising the prices after a gap of 13 years and printing charges had gone up manifold since the earlier price-fixing.

According to NCERT sources, once the revision of the textbooks are completed, the exact price of each would be determined. Alongside, a new portal, now under preparation, will be ready and it will enable schools across the country to place their orders for the NCERT textbooks. The portal is likely to be launched in August to allow the schools to place their book demands and track the deliveries.

Close to 19,000 schools affiliated to the Central Board of Secondary Education and to some other school boards will place orders for NCERT books.
ADVERTISEMENT

The online orders will enable NCERT to validate the actual requirement of books for the forthcoming academic session and ensure supply without delay.
Start a SIP with as low as ₹500 with ET Money App!
Download
The Economic Times News App for Quarterly Results, Latest News in ITR, Business, Share Market, Live Sensex News & More.

Share this NewsWhatsappFacebookTwitterLinkedInemailSaveaPlus
Cancel
Business News › Industry › Services › Education › NCERT textbooks may get dearer by 30% from next year
Text Size:AAA
Sign InSign Up