Following the NPPA decision, some companies have reportedly withdrawn high-priced stents, leading to an artificial shortage of the product.

By ET Bureau | Updated: Feb 20, 2017, 12.42 AM IST
NEW DELHI: The government has reiterated that companies, distributors and hospitals have to comply with its order slashing prices of cardiac stents by over 75%, and warned them of penalty if they violate the directives.

Earlier this week, the National Pharmaceutical Pricing Authority ( NPPA) capped the ceiling prices of drug eluting stents and bioresorbable vascular scaffolds at Rs 29,600 and bare metal stents at Rs 7,260. Including VAT, these stents are expected to cost Rs 31,080 and Rs 7,623, respectively.

A coronary stent is a wire mesh tube used to clear blockages in coronary arteries and prevent heart attacks.

ARTIFICIAL SHORTAGES
Following the NPPA decision, some companies have reportedly withdrawn high-priced stents, leading to an artificial shortage of the product. Although suppliers, such as Abbott, have denied withdrawing stents already stocked at hospitals, some manufacturers are expected to withhold high-end variants of the product.

“We continue to market our full range of coronary stents available in India. In certain cases, we had initiated the process of relabeling to comply with the revised pricing notified by the government,” an Abbott India spokesperson said. 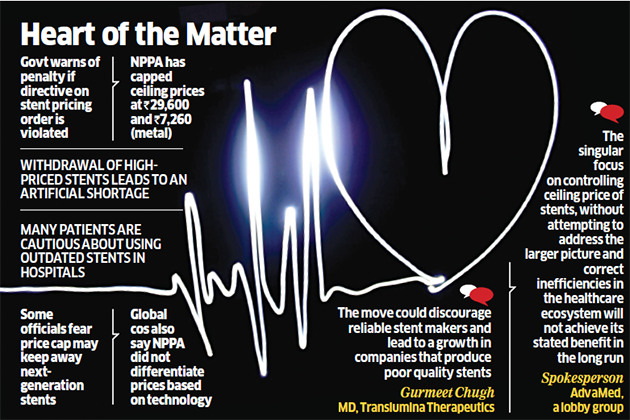 A cardiologist told ET on condition of anonymity that some companies, especially importers, have asked hospitals not to use stents priced higher than the ceiling. “But there’s no shortage of stents,” the cardiologist pointed out.

According to sources, some hospitals have also decided to sell only those stents priced within the ceiling fixed by NPPA. A healthcare provider said stents are still in stock, but many patients are wary of using the ones offered by these hospitals because they are outdated. “We have decided not to sell any stent priced above Rs 30,000. But some patients insisting on high-end stents think they’re getting substandard treatment when we tell them we can’t provide these third or fourth generation stents anymore,” the provider said.

At the same time, several hospitals have stated they will pass on the benefits of the price cap to patients. “We will see to it that all patients get benefited by this order,” stated a spokesperson for Apollo Hospital Groups.

ADVERTISEMENT
NEW REALITIES FOR STENT COS
Stent makers wounded by NPPA’s price cap are now scrambling for ways to plug gaps and remain profitable. While some companies said they are still figuring out how they may adapt to the decision, others are already considering cost-cutting options, such as discarding middlemen who supply to hospitals.

According to Indian stent company Sahajanand Medical Technologies (SMT), most margins made by stent makers go into paying distributor.
ADVERTISEMENT

“What we have decided to do now is to get a drug distribution licence ourselves to save on the working capital cost. We already started the process of reaching out directly to hospitals,” SMT CEO Ganesh Sabat said, adding that reducing the supply chain cost would help companies run a sustainable business.

Stent makers may also trim investment on marketing, training and academic partnerships, which could contribute at least 10-15% to revenue, an industry executive said.

According to domestic stent makers, the NPPA capped the price "too low" and their expectation was anything between Rs 40,000 and Rs 50,000.

“The singular focus on controlling ceiling price of stents, without attempting to address the larger picture and correct inefficiencies in the healthcare ecosystem will not achieve its stated benefit in the long run,” said a spokesperson of AdvaMed, a lobby group for global stent companies like Abbott India, Medtronic and Boston Scientific.

ENSURING COMPLIANCE
Companies, distributors and hospitals found violating NPPA’s order by overcharging patients for the devices would be penalised, Minister of Chemicals and Fertilisers Ananth Kumar had said earlier. In some cases, they could even be blacklisted, he had said.

“Strict action would be taken against violators,” said Jai Priye Prakash, Secretary-Department of Pharmaceuticals, Ministry of Chemicals and Fertilisers. According to him, the government would also use various provisions of the Essential Commodities Act to penalise those found illegally and unethically profiteering or hoarding stents.
Start a SIP with as low as ₹500 with ET Money App!
Download
The Economic Times News App for Quarterly Results, Latest News in ITR, Business, Share Market, Live Sensex News & More.

Private hospitals reuse disposables, make you pay for them