The current market capitalisation of Religare Enterprises is Rs 5,626.31 crore, down around 15 per cent from May when the sale process was launched.

By Arijit Barman, ET Bureau | Jul 02, 2015, 04:00 AM IST
MUMBAI: Bulge bracket private equity groups Apollo Global Management and Baring Asia have emerged as the two frontrunners to take over Religare Enterprises (REL) as the billionaire Singh brothers Malvinder and Shivinder are stepping up to exit their financial services flagship, seven years after cashing out of their flagship pharma operations Ranbaxy.

Both the funds are currently conducting detailed due diligence. The final bids were to be submitted on Tuesday but the deadline has now been pushed till the end of the month, said multiple sources aware of the ongoing negotiations.

Since earlier this May, the Singh brothers have been looking to sell their entire holding or a minimum 51 per cent stake in REL, the integrated financial services platform which has interests in brokerage, asset management, lending solutions, investment banking, wealth management and insurance. As on June of this year, the promoter group owns 50.93 per cent of REL which acts as a listed investment holding company for all the different businesses. The promoters are flexible in terms of exiting entirely or staying on as junior partners, depending on the final offers on table. But a change of management control will also trigger an open offer for an additional 25per cent equity. If it is fully subscribed to, the new owners can end up owning as much as 75 per cent of REL.

The current market capitalisation of Religare Enterprises is Rs 5,626.31 crore, down around 15 per cent from May when the sale process was launched. But even at today's price, a 51 per cent stake sale will generate at least Rs 2869 crore ($478 million). Since 2013, IFC Washington, the private sector lending arm of World Bank also has a near 8 per cent stake in REL, their largest exposure in Asia, pursuant to the conversion of debentures into equity shares.

Investment bank JP Morgan is advising Religare and its promoters. 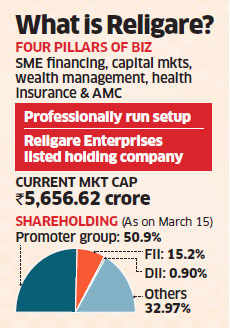 ADVERTISEMENT
When contacted, a Religare spokesperson said, “As a matter of policy we don't comment on hearsay and market sources. However, as we have stated earlier, basis a clearance from our board last year we are evaluating various strategic alternatives to raise primary capital and also further institutionalize our shareholding to support our future growth trajectory. To comment and arrive at any conclusions beyond this based on your sources would be baseless, speculative and highly presumptuous.”

A spokesperson of Baring Asia declined to comment. Mails sent to Mintoo Bhandari, Apollo’s India head did not generate a response till the time of going to press.

ET in its edition dated May 4th had first reported about Religare Enterprises being on the block.

There is no guarantee still that the negotiations will translate into a deal, warned an official involved directly and added the management may end up raising growth equity of around $200 million or capitalise some business verticals only, if they do not get the right value. But at the same time they added, the promoters are open about an exit.
ADVERTISEMENT
Led by the trusted confidant of the Singh family, Chairman and Managing Director Sunil Godhwani, and built with a vision of becoming an "Indian Merrill Lynch," Religare has not been able to achieve its goal of becoming an Asian investment banking powerhouse even though it hired several expensive top management executives from many global competitors, feel industry watchers.

Only pockets of Religare’s businesses are profitable with the SME focussed NBFC and global asset management arm ­­­­collectively contributing the lion’s share. But for both the potential PE suitors, it is the attraction of owning a financial services platform that has got them interested, said sources.
ADVERTISEMENT
Apollo, among the largest PE players and alternative investments platform in the world with over $170 billion of assets under management, has invested over a billion dollars in India through its different arms. Globally despite their flair for turning around large distressed assets in the manufacturing and industrials sector, they own large chunks of banks and insurance companies in US and Europe. Since the beginning of 2008, Apollo has also also been significant acquirer of senior secured loans of from investment banks and other financial institutions. In April 2008, Apollo, TPG Capital, The Blackstone Group and completed the acquisition of $12.5 billion of bank loans from Citigroup.

Similarly, Baring Asia has just raised a $4 billion Asia fund – their 6th so far – and has been among the most active PE investor in India, focussing on both buyouts as well as growth equity investments. Out of that, the fund is aiming at deploying at least a billion dollars in India. From Lafarge India to Hexaware and then the recent takeover of CMS Info Systems, Baring has been making far bigger, bolder bites in recent times. Historically too, they have been large backers of local financial service providers having invested in Shriram Capital, Share Khan brokerage. They have also been in the race to pick up a minority piece in L&T Finance Holding.

REL professionally managed. A majority independent board supervises the operations. The businesses themselves are operated out of its portfolio companies which are structured as subsidiaries and joint ventures. Each of them, in turn, is managed by its own CEO and management team for daily operations. As a holding company, REL is the principal capital provider, custodian of the brand and keeps a tab on the risk and governance structures. For example, it owns around 84 per cent in Religare Fin Vest Limited - an SME lending focused NBFC which is also arguably the platform's mainstay. PE Investors Jacob Ballas and Avigo Capital are minority investors of this NBFC. Similarly, REL owns the majority in Religare Asset Management Co - a 51:49 per cent JV with Atlanta-headquartered Invesco and manages the Religare Invesco Mutual Fund. It partners Corporation Bank and Union Bank (5per cent equity each) for its health insurance foray.

The management team has around 20per cent economic interest in equity to align their interests with shareholders. Sources add, while they own 10per cent at REL level, in Religare Capital Markets - the institutional equity broking and investment banking division - they own 25 per cent of the total equity capital. Sources add, the management team along with CEO Nath is likely to continue with the new owner.

The lending business dominates REL's total revenues, contributing half of its consolidated revenues as per the as per the company's presentation from June this year. It is one of the largest SME lenders in the country with an approximately Rs 13,200 crore loan book size. It has a 1.69 per cent net NPA on a 90-day basis (as on March 2015). The India asset management piece has an AUM of Rs 21,000 crore, as per the lastest figures while the global asset management arm comprises offshore funds with an AUM of $20 billion. It also incubates AIFs in India and Asia across high-yield debt, healthcare, education and consumer private equity. The retail broking operations have also turned around with a Rs 25 crore profit on a Rs 482 crore turnover. It has 192 branches and 1302 franchisees, as per company information. At a consolidated level too, the turnaround is imminent as Religare has clocked Rs 211 profit after tax on a Rs 4187 crore revenue in FY15.
Start a SIP with as low as ₹500 with ET Money App!
Download
The Economic Times News App for Quarterly Results, Latest News in ITR, Business, Share Market, Live Sensex News & More.