Apollo sold 3% of its stake or 32 million shares at an average price of Rs 82.05 for Rs 263 crore as against their original purchase price ofRs 39.8/share.

Apollo sold 3% of its stake or 32 million shares at an average price of Rs 82.05 for Rs 263 crore as against their original purchase price of Rs 39.8/share, said sources in the know. Apollo will book a profit ofRs 135 crore through the transaction. This will be the first tranche of the share sale by the bulge bracket PE firm, which is now left with an 8% stake in the company

Apollo in 2009 invested close to $100 million for 11% in the company, valuing it at Rs 4,603 crore ($990 million). It was the maiden investment in India. Apollo, among the largest PE players in the world with over $170 billion of assets under management, has invested over a billion dollars in India through its different arms. An Apollo Global Management spokesperson in India declined to comment.

The Dish TV stock has consistently outperformed the market. Over the past year, it has gained 65% against the Sensex, which has risen only 28%. The stock hit a 52-week high ofRs 89.05 in intra-day trade on April 8. On Friday, the stock remained unchanged at Rs 84.90 on the BSE.

Backed by Essel Group, the parent of Zee Network, Dish TV has expanded rapidly since its 2005 launch. The company now has approximately 12.5 million net subscribers (27% market share), with a wide distribution network and strong infrastructure. With the advent of digital technology, Dish TV is able to offer superior services with a good range of about 470 television/audio channels and services, as well as 43 high definition (HD) channels and services. 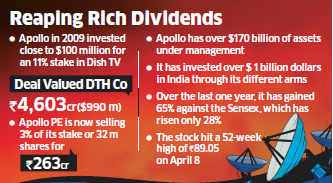 ADVERTISEMENT
According to analysts, over the past few years, Dish TV's execution has been patchy. However, with steady delivery on most operational and financial parameters over FY15, most expect higher investor confidence. But consistency will be the key for any re-rating of the stock to sustain.

With revenue growth steadily picking up (net subscriber additions + ARPUs), the company’s efforts to manage costs (including content costs) should aid in an overall profitability improvement.

Dish TV reported a net loss ofRs 2.87 crore in the quarter to December 2014, lower than the net loss ofRs 38.25 crore in the year-ago quarter. Net sales rose 16.6% year-onyear to Rs 711.22 crore in the three months to December 2014.
ADVERTISEMENT
Analysts, however, expect the company to post its first profitable quarter in the three months to March. Dish TV may also end FY15 with a Rs 700 crore plus EBITDA figure. The historical losses have been on account of investments in set top boxes.

Over 10 years, DTH has successfully challenged the might of cable television with superior quality of broadcasting and a clear technological edge. There are an estimated 47 million DTH customers in India today, which is 36% of the Indian TV households.DTH is adding about 8.5 million customers a year, four times more than cable additions.
ADVERTISEMENT
According to Hong Kong-based consultancy Media Partners Asia, 42% of all TV homes in the world will be on DTH by 2020.
Start a SIP with as low as ₹500 with ET Money App!
Download
The Economic Times News App for Quarterly Results, Latest News in ITR, Business, Share Market, Live Sensex News & More.
READ MORE
ADVERTISEMENT